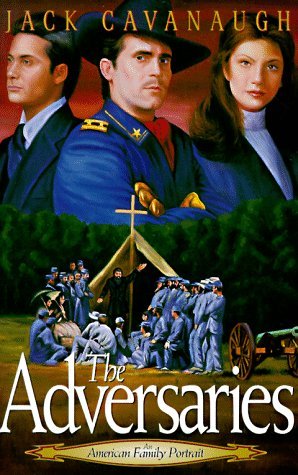 The Jeremiah Morgans of Ohio and the Seth Coopers of Virginia share a friendship and faith stretching back two centuries to Edenford, England. Now that their children, Sarah and Daniel, are engaged to be married, that bond will forever be secured by blood. But when the Morgan brothers–J.D., Marshall, and Willy–run slaves to freedom during a Cooper family visit, a small-scale skirmish between Northern and Southern families breaks out, prophetic of the full-scale war to follow.

As the Civil War erupts, the children of the two families are uprooted from home–the boys to battlefields, Sarah to the big city of New York to write tracts for homesick soldiers. But their greater peril may come from New York banker Caleb McKenna, a long-time enemy of the Morgans and Coopers, who plots revenge for the death of his only daughter. Can human relationships win out over political and geographical differences? Can a commitment to God and family overcome hatred and vendettas? Join a new generation of Morgans as they experience life and love amidst a nation at war with itself.

Well, for one, I hate that cover. None of the people look how I imagine them to be (except maaaaaybe the woman on the right who I’m guessing is Sarah), and, in my opinion, the picture on the bottom is wrong. Yes, a spiritual revival among the troops is a plot point in the book, but I think a battle scene would have brought the spirit of the book across so much better. But it was better than the other cover, so I went with it. Anyway…I’m not here to discuss the book cover. I’m here to discuss the book.

And what a book it is. The fourth in the amazing American Family Portait Series, The Adversaries has to be my favorite book in the entire series. I think the main reason is the characters (which I’ll be getting to in a minute), because this book is probably the darkest in the series. I mean, it’s the American Civil War, for goodness’ sakes. Actually, it doesn’t start with the War (takes quite a few chapters to get to it), but the events building up to it are ominous enough on their own. The thing about reading historical fiction (mainly those surrounding wars) is that you know how everything is going to end. So you have this tragic feeling of dread. It’s terrible, and it’s probably why I find this book the hardest to read (even more than the WWI and II books). Plus, Jack Cavanaugh (have I mentioned he’s a genius?) heaps feels on you at every turn. I’m always crying by the time I finish it (even when I’m with other people).

This book. Has some of the most awesome characters ever. There’s Sarah, the budding writer who meets Harriet Beecher Stowe (one of the first times I was jealous of a fictional character), and Jenny, her friend (who is one of the best female characters in any of JC’s books). Then, there’s JD (John Drew) and Marshall, and Willy – the three Morgan brothers. JD is my favorite, because he’s the oldest brother and he’s such a gentlemen (and because of Certain Tragic Things That Happen To Him). Willy follows very closely. He’s crippled in one leg, he sketches gorgeous pictures, and even though he doesn’t think so, he’s totally a hero. Marshall’s at the bottom of my list because, well, he’s really vengeful and rude at times…but he does improve by the end of the book, so I’m happy.
Basically, the three brothers enlist in the army (well, Willy tries, but he can’t because he’s disabled and Marshall goes totally rogue and JD’s in disgrace). Things were going pretty well with the book (I’m talking about the first time I read it), I was enjoying it, and the pages were flipping pretty fast…

Benjamin McKenna Morgan stepped on the page and stole my heart.

He actually didn’t steal my heart until near the ending, but now whenever I re-read it, I like him right off, because I know how his story is going to end. When he first appears, he insults JD, Willy, and Marshall all at the same time and he continues to do so for over half the book (he’s their commanding officer). Annnd he sends JD/his company into the thickest part of the battle so JD will die (as per his dad’s – Caleb McKenna’s – instructions). Only JD doesn’t die (but pretty much everyone else does), so Ben comes and apologizes (after he got saved). And THEN. There’s the Big Reveal which makes me cry every. single. time. Then Ben and the Morgans and the Coopers (family friends of the Morgans) all go pack up and save Willy from Andersonville Prison.

[OH. There’s a scene where Ben and Willy are pretending to be dead along with a bunch of other corpses (looong story) and Jeremiah (Willy’s dad) finds them and…can’t say anything else for spoilers, but m’dear Tanya Stark knows what part I’m talking about, and I had to put it in for her.]

So, everything works out for good (for some people), and there’s an Epilogue, as usual (there’s one in all the AFP books) with a triple wedding and the passing down of the Cooper and Morgan Bibles to the next recipient. Which is always emotional, for some reason, but this time even more so, because it was originally going to go to JD, but because of a wound he got in that one battle Ben sent him out on, he can’t have an children (the scene where he finds out is just…FEELS), so the Bible has to go someone else. And the person Jeremiah chooses is so unexpected and perfect and right. It’s awesome.

I’m afraid this review won’t make much sense to people who haven’t read The Adversaries, so GO AND READ IT. You’ll love it and hate it and it’ll take up your life for at least a few hours. So, all in all, it’s a really good read.

One thought on “book review: the adversaries”