{This post is part and parcel of the John Wayne Blogathon.}

The film begins in 1910 when a successful aging U.S. senator Ransom Stoddard (James Stewart) and his wife of twenty-five years Hallie (Vera Miles) return to the small western town Shinbone, where they met, to attend the funeral of Tom Doniphon (John Wayne) a man known in the town as a good man but undistinguished.  However, as Ranse begins to tell Tom’s story, it is evident that there is more to him – and Ranse and Hallie – than meets the eye.

What a movie.  The opening scenes alone are enough to put a lump in your throat, even if you’re only seeing it for the first time and you don’t even know what’s going on.  There’s so much aching poignancy and melancholy in both of the ‘present day’ parts (the one at the beginning and the one at the end).  As for the middle of the film, well, it’s one of the most entertaining, thoughtful westerns I’ve ever seen.  The story is tight and fast-paced and there’s something about the stark beauty and simplicity of black & white that I love, especially in this film.  And, again, it’s pretty emotional.  I definitely teared up a couple of times.

And the characters!  TMWSLV is bursting with lovable characters.  Vera Miles as Hallie is one of the standouts of the film, in my opinion, with her expressive acting and strong character.  She’s one of the best female characters I’ve ever seen in a Western movie.  James Stewart is great, as usual, and as for the bad guys…Liberty Valance is played by Lee Marvin and he makes for a delicious villain.  Very scary, very memorable.  And one of his sidekicks is played by Lee Van Cleef!  It doesn’t get any better than that. 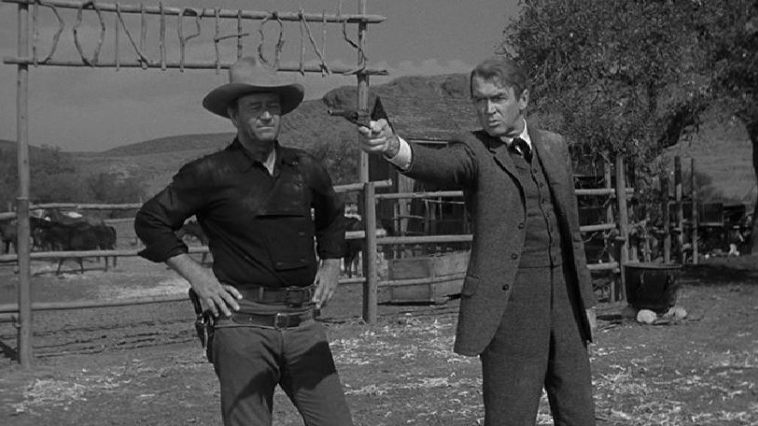 But I watched this movie for John Wayne, really, so I’ve saved talking about him and his character, Tom Doniphon, for last.  Now, truth be told, John Wayne isn’t one of my favorite actors.  And I haven’t much cared for him in any of the films I’ve seen him in thus far (this, The Horse Soldiers, and The Longest Day), but I went into my re-watch of TMWSLV with an open mind, determined to be fair.  And you know what?  I actually didn’t mind him much at all – in fact, there were several parts where I liked him quite a bit.  Of course, it helps that Tom is such an awesome character: sure he’s rough around the edges and he’s tough (naturally) and more than a little rude at times, but it’s near the end where you really realize how much he cares for Hallie and just how heroic he is.  So I quite liked him.

Overall, The Man Who Shot Liberty Valance is one of my favorite westerns ever and John Wayne is a big part of that.  Have you watched it yet?