The general who became a slave. The slave who became a gladiator. The gladiator who defied an emperor. (I know Commodus says this line, which sucks, but it’s still a really good quote.)

I’ve made no secret of my love for ‘Gladiator’ (2000).  It’s a near-perfect film and Russell Crowe always blows me away with his portrayal of Maximus.  So when someone on Quora slammed his performance, saying that he never changes expression, only has three or so lines, and should never have won an Oscar for the role…I knew I had to write a rebuttal.

(Also, I said I’d write about Maximus for the Blizzard of Oz Blogathon.  So yusss)

One of my favorite parts of ‘Gladiator’ is the first half hour (before everything goes to pieces).  Maximus is a brilliant general, though a war-weary one who can’t wait to return home to his wife, son, and farm.  Yet he will stay for his emperor…and for Rome.  By watching how his men respect and trust him, you can tell that Maximus is a great leader.  Their loyalty to him (and his to them) is really awesome and part of me wishes that they could have come to his aid later in the movie (the way he’d planned).

Maximus is first and foremost a loyal soldier of and to the Roman Empire and in the  opening scenes of the film, Russell Crowe projects authority and respect for Marcus Aurelius (and the emperor’s family).

With the murder of Marcus Aurelius, Maximus’s life becomes forfeit.  Sure, he could have taken Commodus’s hand and sworn allegiance to the new emperor, but with Commudus’s changeable moods and paranoia it would have only been a matter of time before he had Maximus killed.  So Maximus’s family is killed and he himself is captured by slave traders.

Maximus’s brand, the one proving him to be a former soldier of Rome, is what convinces Proximo (a guy who owns gladiators…idk what his official title is?) to buy him.  When put up against a seasoned gladiator (to see if he’ll be slated for a quick death or become a gladiator himself), Maximus refuses to fight.  I think a big part of that is because Marcus Aurelius was against gladiatorial fights and Maximus still considers himself loyal to the former emperor.

Russell Crowe portrays Maximus with a variety of emotions in this section of the film: furious over the death of the emperor (though he hides it pretty well), absolutely heartbroken over the gruesome deaths of his wife and son, indifferent as to whether he lives or dies while in the slave market, and quietly defiant once purchased by Proximo. 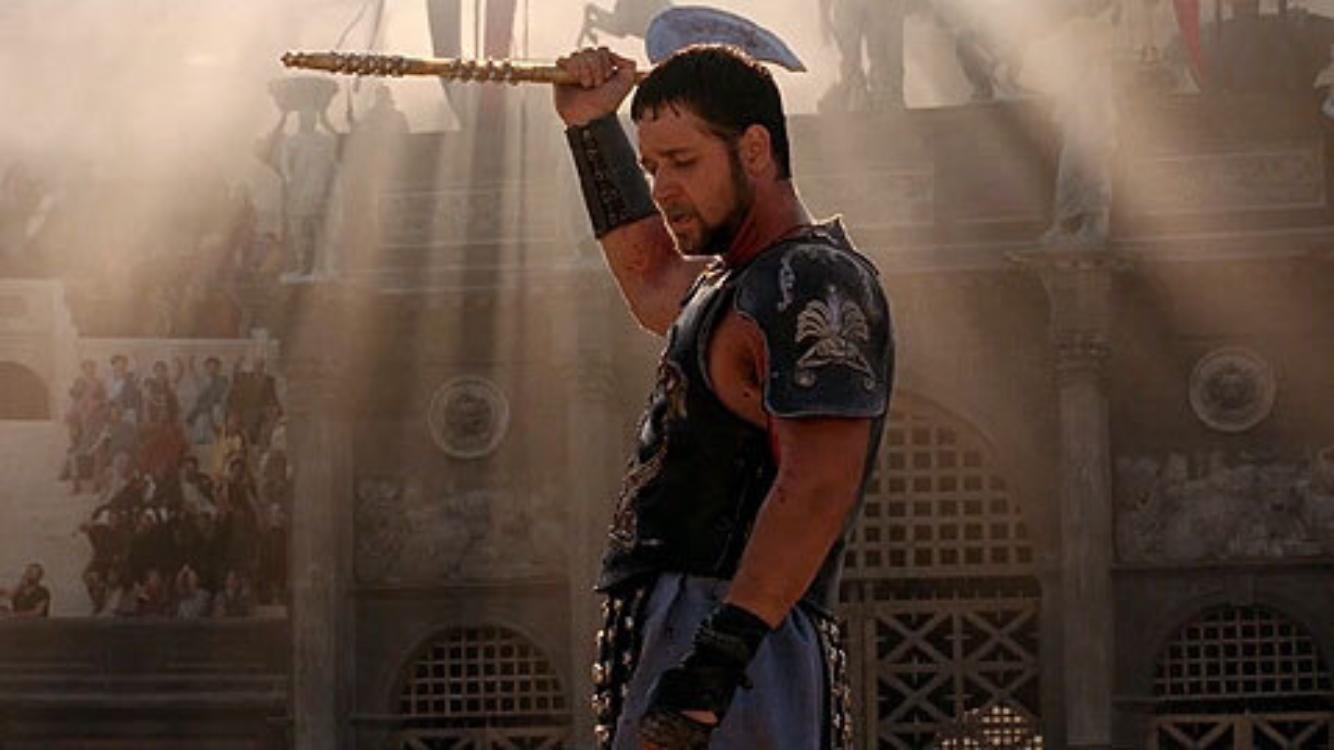 This section of the film is the longest.  Obviously.  Even though Maximus refuses to fight for a place in the rankings, Proximo labels him a good fighter and throws him into the arena.  Once inside, Maximus’s survival instincts take over and he kills.  And kills.  And kills.  He hates the mobs who scream his name with bloodlust.  But he kills and, because of his military training, he’s very good at it.

When Commodus is made emperor, he hosts a spectacle of killing games so Proximo packs up his gladiator troupe (including Maximus, of course) and heads to Rome…and to the Colosseum.  Over the course of a few battles in the arena he gains the gaze of Rome.  The battles are AMAZING, in that they highlight Maximus’s ability to lead and gain the loyalty of just about anyone; all the gore isn’t amazing, though, so please don’t think I’m a weirdo who likes seeing lots of blood and hacked off limbs.

Anyway, he gets everyone’s attention.  Including Commodus’s, who quickly finds out his true identity and fumes because he can’t figure out a way to kill Maximus while making himself look good.  Maximus also catches the eye of a senator and with the help of Commodus’s sister, Lucilla, they concoct a plan to remove Commodus from power.

Only it goes horribly, horribly wrong and Maximus is dragged into the arena one last time.  This time, he goes up against Commodus (who wounded him, almost fatally, before the match).

I-I can’t say enough good things about Russell Crowe’s acting.  He’s furious and saddened about the position he’s been put in – killing other human beings.  He desperately misses his family.  He forges new loyalties and friendships with fellow gladiators. (That scene where the one guy tastes his food???  MY HEART.)  And there’s an undercurrent of melencholy in each of his scenes; it hits me so hard. (“My wife…and my son…are already waiting for me.”  WAAAAAAAA.)

Okay, okay, I get that Maximus wasn’t a real person.  I get it.  But in the world of the movie, he becomes a legend.  He kills Commodus.  He frees the prisoners.  He single-handedly saves Rome, okay??? (Melodramatic?  Yes.  But I wouldn’t have it any other way.)  And then, finally, he goes to be with his family in one of the most uplifting/sob-worthy movie endings ever.

And Russell Crowe nails every moment of it.  In this part of the film and all the ones proceeding it.  Just…incredible.

He totally and completely deserved his Oscar.

*’Now We Are Free’ starts playing*

Now we are free. I will see you again.  But not yet…not yet!